Within the preparation to host the UIHJ Congress, Dubai Courts welcome the UIHJ Delegation to exhibit its accomplishments and show its distinction 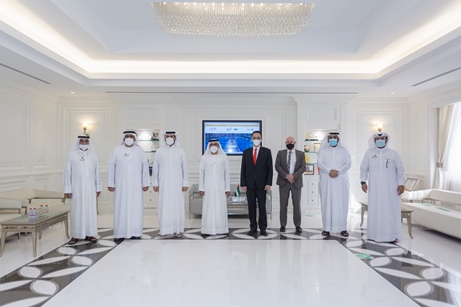 The visit aim to coordinate the Congress planned to be held under the theme of Cyberjustice : New opportunities for the judicial officer. The congress serves as an incentive for all countries in the region to cooperate with the international partners and to qualify new generation of legal professionals in enforcement of judgments. The congress supports the future vision of the wise leadership in judicial sector.

During the meeting, His Excellency Taresh Eid Al Mansouri, Director General of Dubai Courts, explained that hosting the congress of the International Union of Judicial Officers (UIHJ) is a remarkable unprecedented achievement in the region. The Congress is the largest platform, around the world, that focuses on best judgments implementation practices and provides support to judicial institutions. The congress focuses also on improving services, assisting beneficiaries in conducting transactions while applying highest level of transparency and credibility.

His Excellency affirmed that Dubai Courts is strong because it developed cooperation with related organizations in order to provide distinct and globally recognized services, beside the support received from the wise leadership. Dubai Courts’ accomplishments are based on vision and consistent benchmarks inspired by Dubai ambitious vision. Dubai Courts is loyal to the principles and objectives they aim to achieve, so that it keeps its advanced position in launching positive initiates and projects.

His Excellency affirmed also that he has confidence that this congress, hosting more than 300 specialists from 90 countries, will be an important addition to the common efforts, in exchange of expertise and best practices in judicial field. . .It is important that this congress will be held in the most important time, as we prepare to overcome the pandemic and move to a new stage, said His Excellency. His Excellency appreciated the trust by the board of directors and members of the International Union of Judicial Officers (UIHJ) given to Dubai Courts to host this globally recognized event. This global event will be held during the period from 22 to 25 November 2021, and through this event a new path will be opened to a future full of opportunities.

During the visit, the official website of International Union of Judicial Officers was launched. The visitor delegation visited other courts in the country to affirm the importance of this exceptional scientific event. The event is great opportunity to develop the job of the judicial officer and it represent unique platform to exchange ideas between the judicial staff around the world and the key organizations. The participants gather to give their opinion for development of justice, as the future depend on knowledge to progress in execution of judgments and supporting judicial institutions. We hope to find new means to make our world better, more just and connected, while providing society members with all what they need in the future to achieve their visions and ambitions with developing justice.